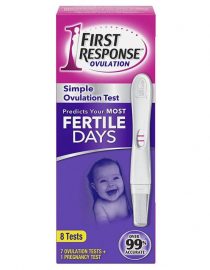 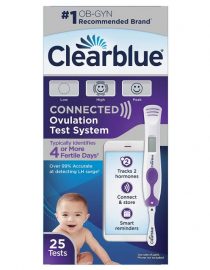 The Clearblue Advanced Digital Ovulation Test ( Prueba de Ovulacion Advanced Digital Clearblue) typically identifies 4 or more fertile days leading up to, and including the day of ovulation, at least twice as many as any other ovulation test.**

The Clearblue Advanced Digital Ovulation Test is a breakthrough: it is the only ovulation test that not only detects the rise in luteinizing hormone (LH), but also monitors the level of another key fertility hormone, estrogen, which increases in the days before the LH surge. Because your partner’s sperm can survive in your body for up to 5 days, you can actually become pregnant by having intercourse during the days leading up to ovulation.

Clearblue Advanced Digital Ovulation Test is not intended for contraceptive use and is not suitable if you have recently been pregnant, reached menopause, have polycystic ovarian syndrome (PCOS) or are taking certain fertility drugs. Keep out of the reach of children. This device is for home use. Do no reuse the test sticks. Store at 36°- 86° F (2° – 30° C). Do not freeze. For in vitro diagnostic use. Not for internal use.

The Clearblue Advanced Digital Ovulation Test is the only ovulation test that detects the rise in 2 fertility hormones, estrogen and luteinizing hormone (LH), before ovulation. Make love on High and Peak fertility days to maximize your chances of getting pregnant naturally. *Data on file. Research into recommendation of Ovulation Tests &amp; Fertility Monitors with 204 US Ob-Gyns (Kantar Health 2011). **In a study of 87 women in the UK, 4 or more fertile days were identified in 80% of cycles using cycle length (2012). ***It’s over 99% accurate at detecting the LH surge. Hormones are a more accurate predictor of ovulation than Basal Body Temperature, which only changes after ovulation.