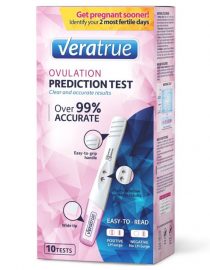 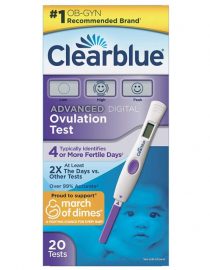 Get Pregnant Sooner² — Know Your Two Most Fertile Days! Maximize your chances by accurately predicting your most fertile days, so you can make the most of your prime conception time. Then, at the end of your cycle, use the included FIRST RESPONSE Pregnancy Test, which can detect the pregnancy hormone 6 days³ sooner than your missed period.

FIRST RESPONSE Ovulation Test: • Over 99% accurate in laboratory studies in detecting the luteinizing hormone (LH) surge in your urine. The LH surge indicates when you’re most fertile and likely to conceive. • Predicts the two days each month when you’re most likely to become pregnant. • Easy-to-read results in just minutes.

Each ovulation test kit contains enough sticks for a full week of testing. FIRST RESPONSE Pregnancy Test: • The only brand that tells you 6 days sooner than your missed period • Over 99% accuracy from the day of the expected period4 • Easy-to-read results

Two lines means pregnant and one line means not pregnant • Results in 3 minutes Available at major drugstores, grocery stores and other retailers nationwide.